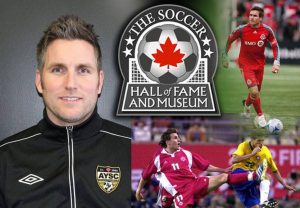 TFC history shows that defender Jim Brennan is the first player ever signed by the MLS club (on September 8th, 2006), the club’s first captain and the first Canadian to score a goal for TFC! He also answered the call for Canada 49 times, including the victorious 2000 CONCACAF Gold Cup squad. His hometown is Newmarket and he spent just over a decade in England with Bristol City, Nottingham Forest, Huddersfield Town, Norwich City and Southampton before leaping at the chance to become the initial face of the fledgling MLS franchise. In that inaugural season playing before the most passionate fan base in the MLS, Brennan was selected TFC’s Defender of the Year and shared TFC’s MVP award with Carl Robinson. Brennan became known as the “Iron Man” playing every minute of TFC’s first 27 games until a knee injury sidelined him for the final three games. His pro career ended with TFC in 2010. When TFC reached the MLS Cup Final in 2016 and then won the MLS Cup in 2017, Jim Brennan was mighty proud indeed. After all, this first Reds is a forever Red!