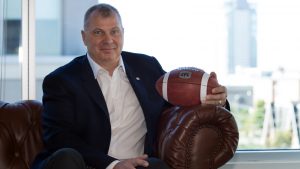 With enormous passion and pride, Randy Ambrosie says the Canadian Football League is “wrapped into my DNA.” He was introduced as the 14th Commissioner in League history on July 5th, 2017. The 54-year-old Winnipeg native excelled as an All-Canadian offensive lineman with the University of Manitoba where he also earned a Bachelor of Commerce degree. The Calgary Stampeders made him the No. 2 overall pick in the 1985 Canadian College Draft. His CFL career saw him with Calgary (1985-87), Toronto (1987-88) and Edmonton (1989-93) where he savoured a Grey Cup championship during his final season with the ’93 Eskimos. Playing in the pits took its toll on Ambrosie’s knees and hastened his retirement. His fervour for the CFL saw him initially take a role with the CFLPA before he put his financial studies from the University of Manitoba, the Columbia University School of Executive Education, the University of Michigan Business School’s Executive Education Centre and the Wharton School of Business to good use as the leader for some of the most well-known securities companies. Now he’s ready to guide the CFL envisioning the League to be “way better … way stronger” in five years’ time.