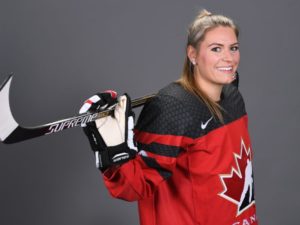 In eight IIHF World Championships, she has two Gold medals (2012 and ’21), five Silver (2011, ’13, ’15, ’16 and ’17) along with Bronze in 2019. She began playing hockey at age four with one year of boys’ hockey before switching to the Durham West Lightning Girls Hockey Association. She earned a scholarship to Ohio State University where she completed four strong seasons where she set the school’s all-time goal scoring record while earning a Pre-Med Nutrition degree.

In 2012, she was selected in the Canadian Women’s Hockey League (CWHL) draft by the Toronto Furies and excelled in that league as well. She joined Meaghan Mikkelson to finish second in Amazing Race Canada in 2014 and also was runner-up in Battle of the Blades 2019 when paired with Andrew Poje. Spooner is already helping tutor the next generation of women’s stars with her one-week summer High Performance Academy for Girls. Spooner married Adam Redmond last July making the past year of her life all that more special. Congratulations Natalie!