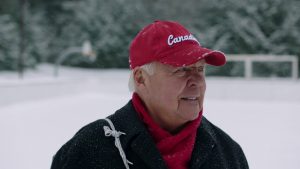 At 5-foot-7 and just over 170 pounds, Yvan Cournoyer’s combination of speed, smarts and opportunism earned him the nickname “The Roadrunner.” Those who had the pleasure of witnessing the Drummondville, Quebec native’s brilliant career with the Montreal Jr. Canadiens (1961-64) and Les Habitants (1964-79) will agree no one in the game was faster from the blueline in than this exciting right-winger. He is tied with Jean Beliveau with 10 Stanley Cup championships, second only to Henri Richard’s 11. In 1973, Cournoyer captured the Conn Smythe Trophy as playoff MVP after scoring 15 goals and 25 points over the 17 games it took for the Habs to emerge as Stanley Cup champions. Back finally slowed down the speedster but his Hockey Hall of Fame credentials were firmly established with 863 points including 428 goals over 968 regular-season games plus 127 points (64 goals) in 147 playoff games. His highlights revolve around his many Stanley Cups and the 1972 Summit Series where he produced three goals and five points. It was his shoot-in that preceded Paul Henderson’s historic goal to win the series – and the jubilation that ensued with the historic photo of the delirious Henderson in the arms of The Roadrunner.